Pakistan super league is the premium T20 competition for a passionate cricket nation of Pakistan which happens each year and six teams compete against each other in a very exciting T20 format that everyone loves.

Pakistan Super League from 1st edition was very interested to bring International cricket back to Pakistan after a sad incident took place a decade ago where the Sri Lankan cricket team was attacked and ICC restricted Pakistan to host International games at home.

PSL is the nation’s heartbeat which has paved the way for International Cricket back home after very successful 4 years of competitive T20 cricket.

A lot of well known T20 superstars want to be part of PSL because of good amount of money and highly professional management which runs PSL.

The last edition, Pakistan cricket board was able to host last eight games out of 34 matches back in Pakistan last year in the fourth edition of Pakistan Super League where Quetta Gladiators won the trophy in the historic final with full packed crowd.

This year, PCB announced that they are going to host all matches of PSL 5th edition back in Pakistan and four cities which are chosen for the honor of hosting PSL matches are Karachi, Lahore, Rawalpindi, and Multan. All these cities have fantastic cricket grounds available as well as all International facilities as per ICC rules and regulations.

Pakistan Super League is known to have a very huge viewership all around the world as well as in India, Bangladesh and all across Africa and Europe.

Millions of cricket fans always stay online and watch it live on Youtube through cricket gateway all across the world just on online portal access. It’s expected since the fifth edition of the league is going to be held in Pakistan completely we will see huge crowds build up at every venue and certainly all franchises will enjoy the hype and fans support which push a sportsman to give his 110% every time he sees the great crowd build-up and it is also the big opportunity for the young players to perform well and pave their way for the national side.

Pakistan cricket board has announced that this year all six franchises will downsize to 18 players a team instead of 21 which will result in the cutting of salaries and will help franchisees to earn profit and do breakeven of their investment. The PSL management has decided to cut down salary caps for teams to $1.1 Million Dollars. Since the PSL is going to be held in Pakistan so there was no need to carry extra players with the franchise as it was the case when league used to be held in UAE and we believe it’s a good decision by the PSL management.

The management of Pakistan Super League has revealed that all six franchises have the option to do maximum 8 retentions while keeping the squad of 18 members. Every franchise needs to pick at least 3 Platinum, 3 Diamond, 3 Gold, 5 Silver and 2 Emerging category of players. Franchises can also pick 2 players in the supplementary category of players. All local players who have their contracts refreshed have three options which are either to be retained by the franchise or they can relegate or they move back to the draft pool where any franchise can pick them once they have the call.

PSL 2020 ( PSL 5 ) draft is scheduled to be taken place on the 6th of December 2019 and PSL management has already started announcing the list of PSL 2020 retained players PSL 2020 teams transfers. So far, four franchises have released information about the PSL 2020 teams retained players and there are more to come. PSL is going to be the biggest cricketing event in Pakistan for the last 10 years as this time the whole league is scheduled to be played in Pakistan on 4 different venues all across Pakistan. Here is the list of PSL 2020 retained player list which has been officially announced.

Pakistan Super League is all about bringing new innovations to the game and as per media reports it’s decided that this year’s 1st Draft Pick in the Platinum, Gold, and Silver Category will be decided by the street cricket thing named ‘PUGAM PUGAI’. The new method is scheduled to be on display on the 3rd of November 2019 where all franchise owners will be present and play the fun game to decide the 1st pick choice. The event is scheduled to take place either in Greater Iqbal Park or Gaddafi Stadium in Lahore where the announcement for the official date of Pakistan Super League 2020 will also be made.

It has been decided now in a street cricket style and we know finally know that Quetta Gladiators has won the 1st Pick for Platinum Round in Pakistan Super League 5th Edition.

There will be a total of 18 picks each franchise will do in Pakistan Super League 2020 Draft which will happen on the 6th and 7th December 2020. The fifth edition will be played in Pakistan from 20th February to 22nd March 2020 next year. 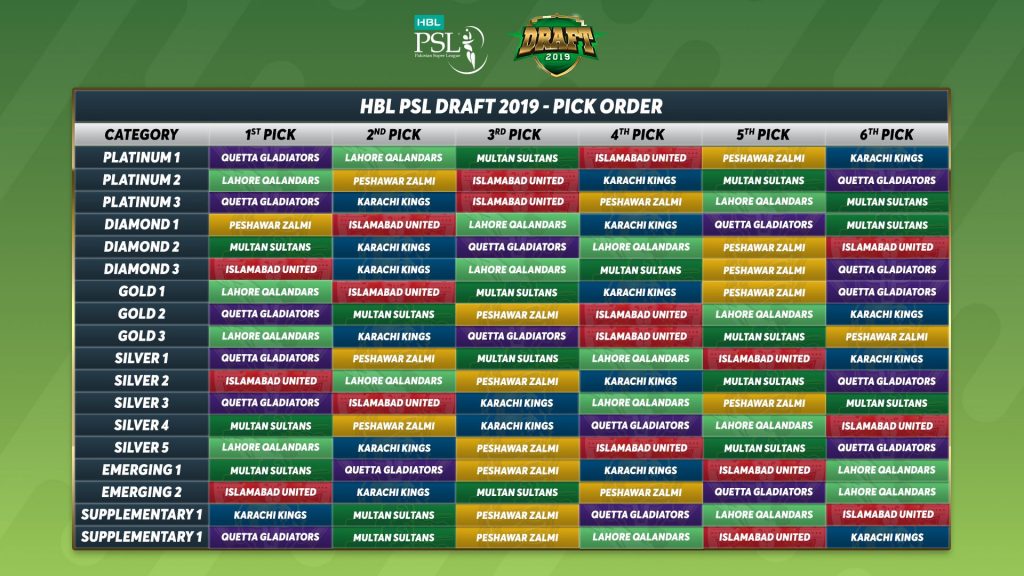 The management of Pakistan Super League has released the local category of players under new rules compiled for the fifth edition of the league and players are divided into five different categories namely Platinum, Diamond, Gold, Silver and emerging. Teams still have the right for the relegation requests with player consent before the finalization of names for the PSL 2020 ( PSL 5 ) draft. The platinum category is given to 17 players which have performed brilliantly in last 4 editions of the league are as follows.

The diamond Category players also earn the top dollar and PCB has announced 10 players from Pakistan who are playing International Cricket in this category where each franchise will choose which one to pick and which to retain.

After, the top tier picks we move forward towards the Gold Category with a base price tag of $50,000 and maximum price of $70,000 and there are 23 exciting players from Pakistan who will feature in this category for Pakistan Super League draft 2020 where all six franchises will decide which player to retain and which ones to pick from local category.

The silver category is the medium-priced picks with a base price of $24,000 per player which can go at a maximum price tag of $40,000. The price will be decided by the franchise and the player itself under the given minimum and maximum criteria.

PSL is all about helping Pakistan Cricket to find some hidden gems who can represent for the national side in future and in the emerging category each year we see some very exciting prospects from Pakistan who showcase their talent at the big stage and have the opportunity to impress selectors and have a large fanbase. Each franchise can pick 2 emerging players with a price tag of $12,000 to $13,000 respectively.

The media sources has been revealing that many International Cricketers from England, Australia, New Zealand, South Africa, Bangladesh, Afghanistan and West Indies have shown their interest to be part of Pakistan Super League held completely in Pakistan. The few top players who might be part of PSL 2020 draft are AB de Villiers, Chris Gayle,Sunil Narine, Dwayne bravo, Ben Laughlin, Shane Watson, Luke ronchi, Corey Anderson, Kieron Pollard, Sandeep Lamichhane, Mohammad Nabi, Rashid Khan, Mohammad Shahzad, Thisara Perera, Tamim Iqbal, Mustafizur Rahman, Mohammad Shafuddin and some Sri Lankan new players who recently toured Pakistan for T20I and ODI series are also expected to be part of Pakistan Super League 2020 Draft. It is also revealed that a total of 120 foreign players will take part in the draft and all franchises will have lots of options to choose and pick the right players in the official draft event of PSL 2020.

The official list for PSL 2020 Draft for Platinum Category has been released. Here are all the players in the list. 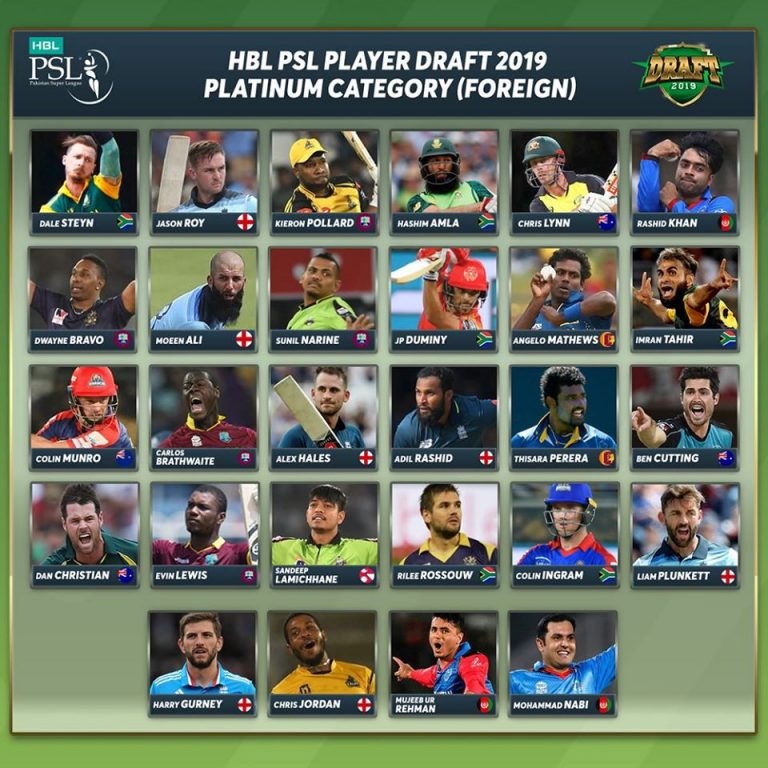 This year Pakistan Super League has a much bigger pool for players in the diamond category as well which is very exciting for the cricket fans all around the world. Now, all International Players have accepted the fact that Pakistan is completely safe to play and fans from Pakistan are eager to see them in action on home grounds. The complete list of Foreign Players in the diamond category is as follows. 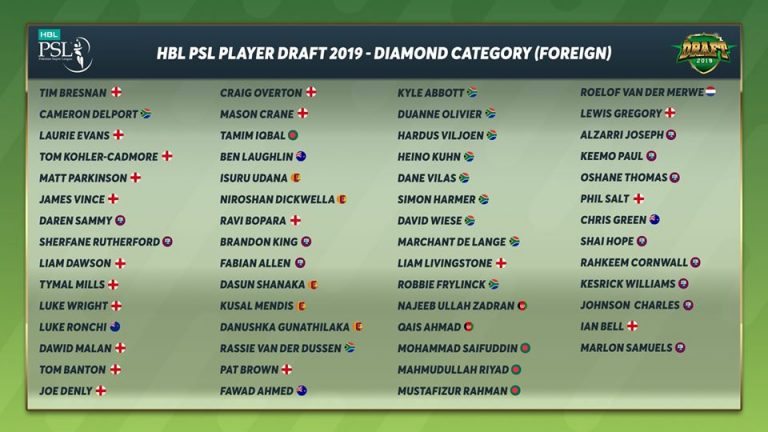 The official draft for the fifth edition of Pakistan Super League will be held in Pakistan on 6th and 7th December 2019 this year where hundreds of local and International stars will participate and since this time the whole league is going to be held back in Pakistan it has been decided by the PSL management that only International players who are comfortable in playing the league back home will be given a green signal and have their name finalized for the PSL 2020 draft.

All the foreign coaches and well known Pakistan Cricket Stars will be present at the draft ceremony where each franchise will look to pick players tactically which can help the franchise to win the PSL all-important title. It’s worth mentioning that this year Misbah-ul-Haq will be heading the draft for Islamabad United while Dean Jones former IU coach will be heading the draft for Karachi Kings along with respected franchise owners.

The draft ceremony will be LIVE on Pakistan Super League social media channels where fans from all around the world can easily watch this historic draft of PSL right with the convenience of your smartphone.

Ten Sports and PTV Sports are official broadcast partners for showing the draft ceremony in Pakistan where 197 million people living in Pakistan will surely follow the historic draft of PSL 2020.

Cricket Gateway is also the broadcasting partner for the draft ceremony where fans from all around the world can watch and follow the Pakistan Super League fifth edition and every year millions of fans, especially in India and UK, follow this competitive T20 League through cricket gateway.

The draft ceremony will be held on the 6th December 2019 and it’s expected it will be held either in Lahore or in Islamabad. A lot of VVIPs including foreign coaches and top International stars as well as Pakistan cricket legends will be present at the draft ceremony and we will update the post once the official draft goes live. The tournament is scheduled to be played from February 20th to March 22nd, 2020. You will find all the latest picks for the draft as it happens so make sure to check back again for all the latest draft picks and team composition for each franchise.

Maybe I'll Get Another Chance to Go Past Lara's 400: Warner

Sharjeel Khan set to be part of PSL 2020 players draft